Public Health Officials in Los Angeles reported on Wednesday that the county had detected the first cases of the Coronavirus variants originally seen in Brazil and South Africa. While only three instances of the virus strain from Brazil — also known as P.1 — and one instance of the variant from South Africa — known as B.1.351 — were detected, they are likely far from the only cases in the county.

Public Health Director Barbara Ferrer noted that, due to the expense, "Very few of our specimens are genetically tested in this way." Statewide, only 5% of tests are run through genomic sequencing, according to California's top health officer. The rate is even less at the county level.
https://deadline.com/2021/04/first-cases-more-contagious-brazil-south-african-variants-los-angeles-1234729751/ 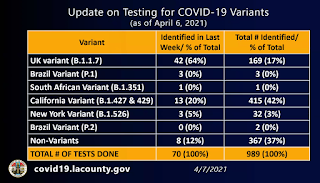 According to the other article I posted, the Pfizer vaccine is 2/3 less effective against the South African Variant and the Moderna Vaccine is 6.4 times less effective.
Posted by John Coffey at 8:26 AM