Certain skeptics have been claiming that the death rate from COVID-19 is only around 0.2%. I tried to confirm this, but the information is all over the place. Some articles are reporting a 5% death rate worldwide and a 4.8% death rate in the U.S.

If I look at the known cases versus known deaths, we get 4.5% for the U.S. and 4.7% for the world. However, some are claiming that there are ten times as many cases that we don't know about, meaning that the death rate is actually much lower. On the other hand, one source said that we might be underestimating COVID-19 deaths because the people were never tested.

I also saw one article that said that the death rate has been going up worldwide: 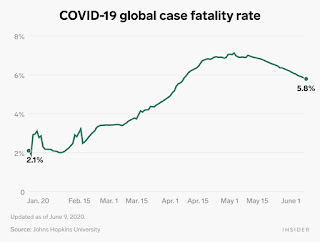